This intersection was designed almost 50 years ago. It was never designed for such heavy traffic and complicated use of the roads. It is so dangerous for pedestrians now. Pittsburgh Resident

Traffic lights at diagonal crossings take a long time to change from red to green. Pedestrians tend to cross nevertheless causing problems to both themselves and drivers. There are other parallel problems too:

Design a solution that the people of Pittsburgh can adopt and help make Pittsburgh a pedestrian safe city.

We planned to conduct two co-design sessions, where we would brainstorm and design with our clients, the people of Pittsburgh.

We designed our first co-design session to be more technical. We recruited three Masters students from the Human-Computer Interaction Institute. Two of them Emily and Morgan had lived their entire lives in Pittsburgh. Our third co-designer, Scott used to be an architect in New York and had a great understanding and formal education in Urban Planning, which we thought was relevant to the problem we were trying to solve.

Through the co-design session, our co-designers helped us narrow down our focus to the corner of Forbes Ave and South Craig. It is dangerous and complicated due to the heavy flow of pedestrians, Starbucks being at the corner, the presence of a small yet busy bus stop, a pick up point for garbage trucks, and a construction site 100 meters away that occupies that portion of the sidewalk completely.

It was so interesting that some of our co-designers felt that jaywalking in this area is probably a safer choice for pedestrians who need to go to cross the road.

Our co-designers proposed we build a tunnel for pedestrians to help them cross the road. What we took from this idea is that people want to separate pedestrians from the road. It also tells us that people might prioritize not waiting at an intersection over safety and that we need to come up with a way to ease the hustle and bustle in this area. 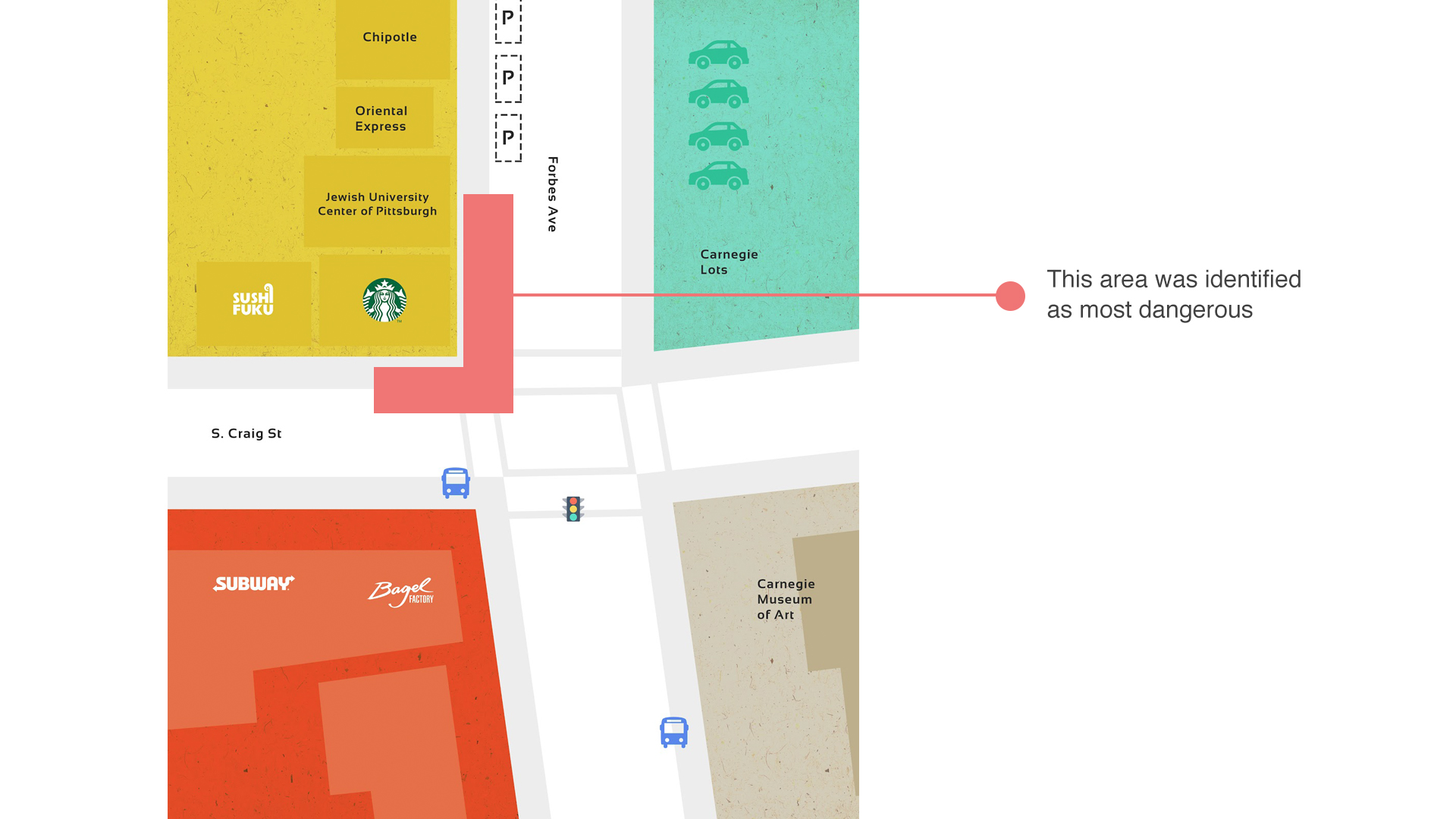 For our next co-design session we wanted to learn more about the people of Pittsburgh and their experiences. We wanted to hear stories about what these people might have seen at these cross-walks and design directly for these problems.

We recruited Sloan from Carnegie Museum of Arts and Natural History, Casey from Starbucks and Qiqi who is an International student who studied at the University of Pittsburgh and now at Carnegie Mellon University.

Problems our Clients Helped us Identify

These are broad pain points clients helped us identify across both co-design sessions: 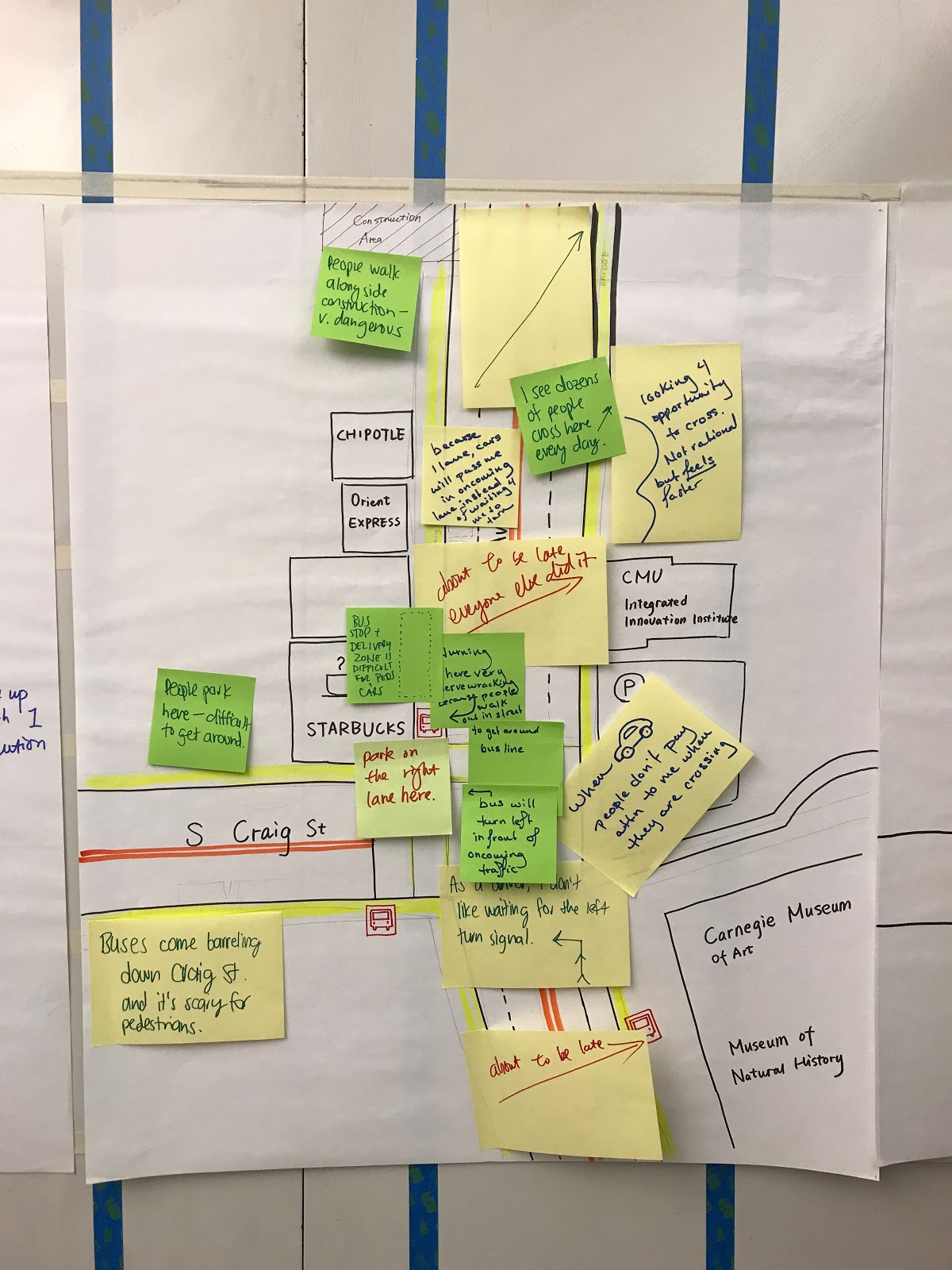 Design Ideas our Clients Came Up With

These are original ideas our clients came up with across both co-design sessions: 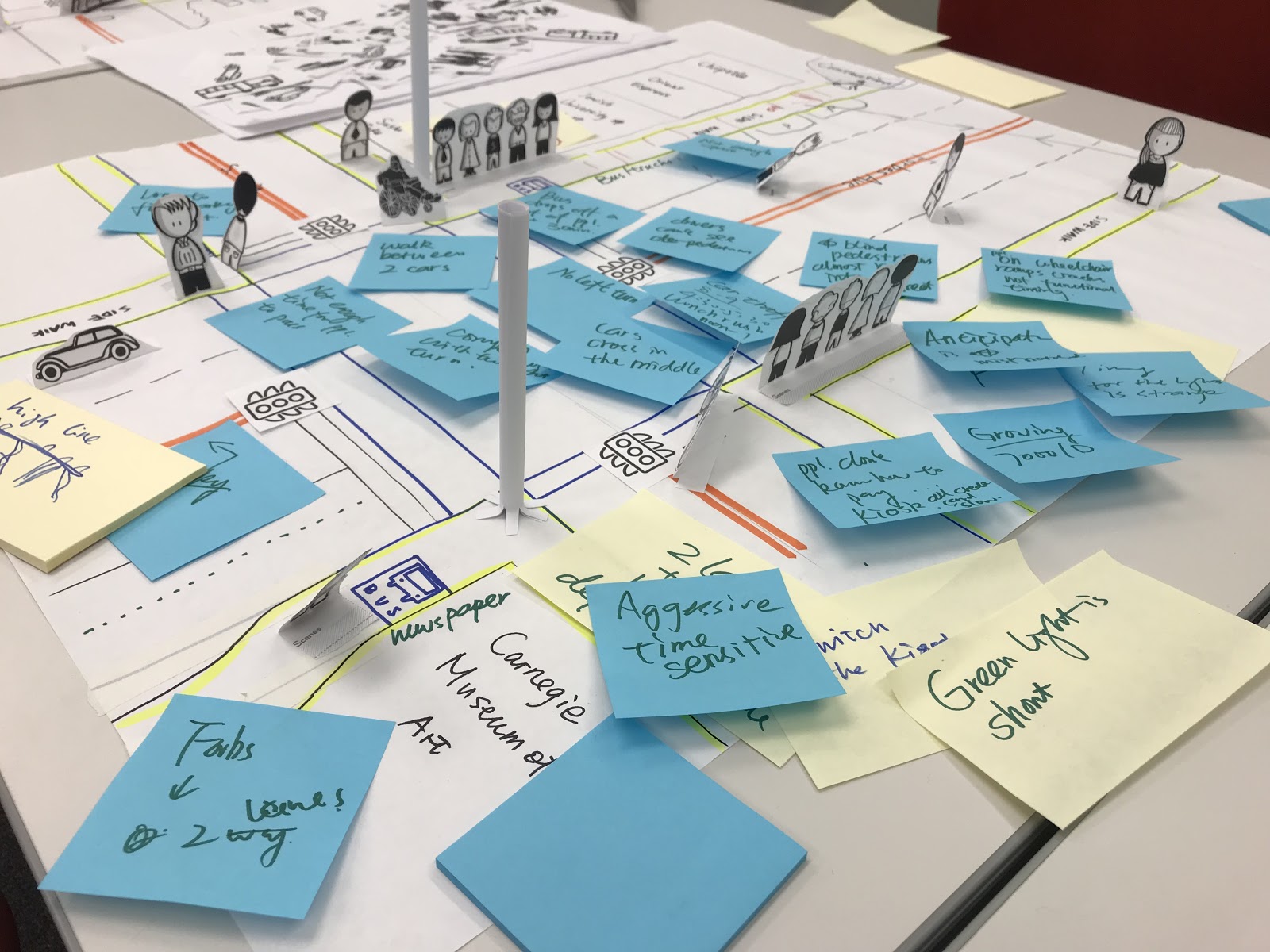 We used what we learned from our co-design sessions to come up with three goals to design towards:

During one of our in-class critique sessions, we presented all our prototypes to the class and asked if they could help us rank them. Our Reactive Prototype received a unanimous vote. 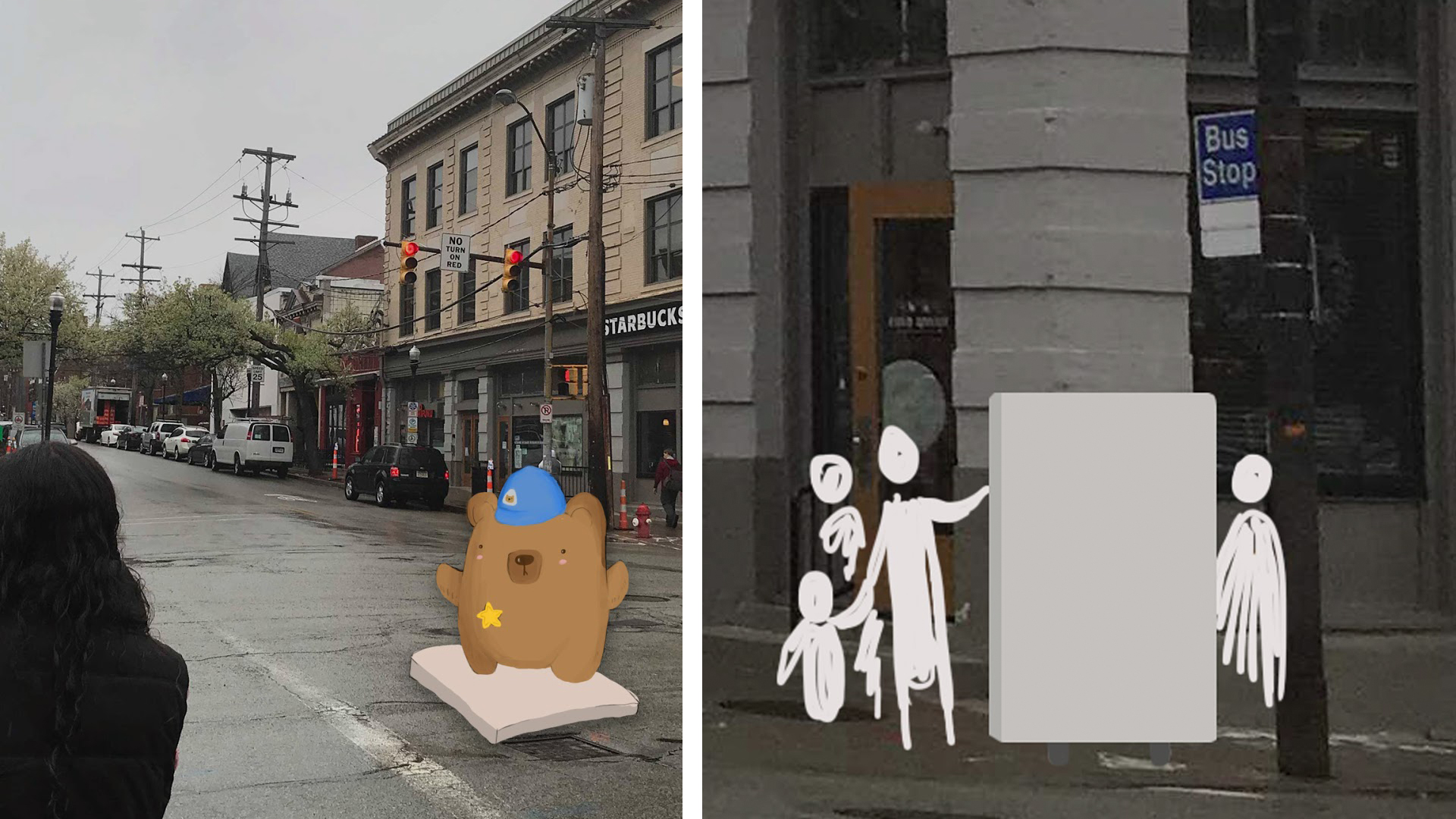 This digital display has a wide angle camera attached to it and it captures real time video of the street. This video feed is transferred to the side of the display visible to pedestrians, giving the illusion that the display is made of glass. 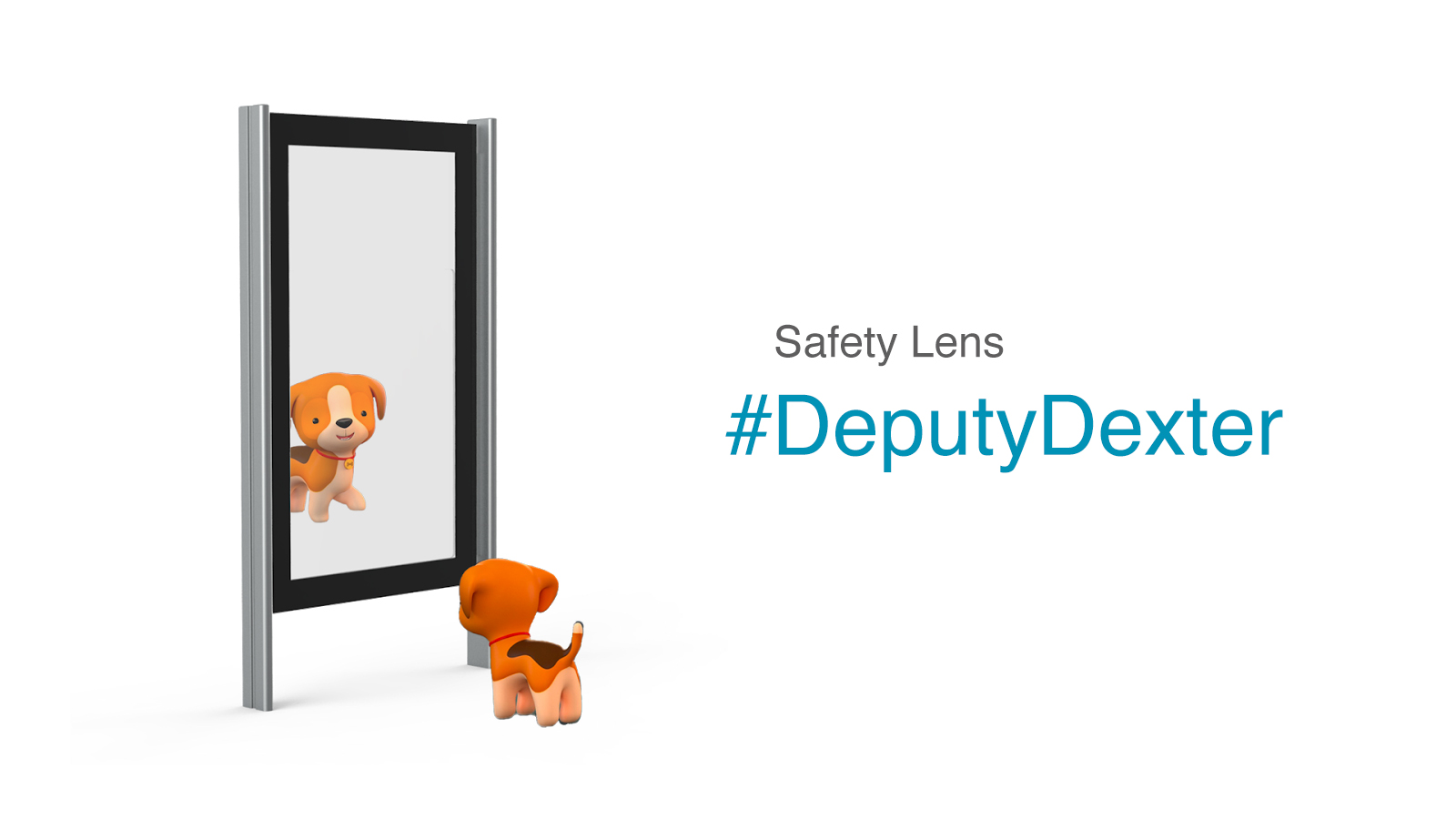 We overlay the video feed with Deputy Dex. He interacts with jaywalkers and this can be seen by people standing at the sidewalk. 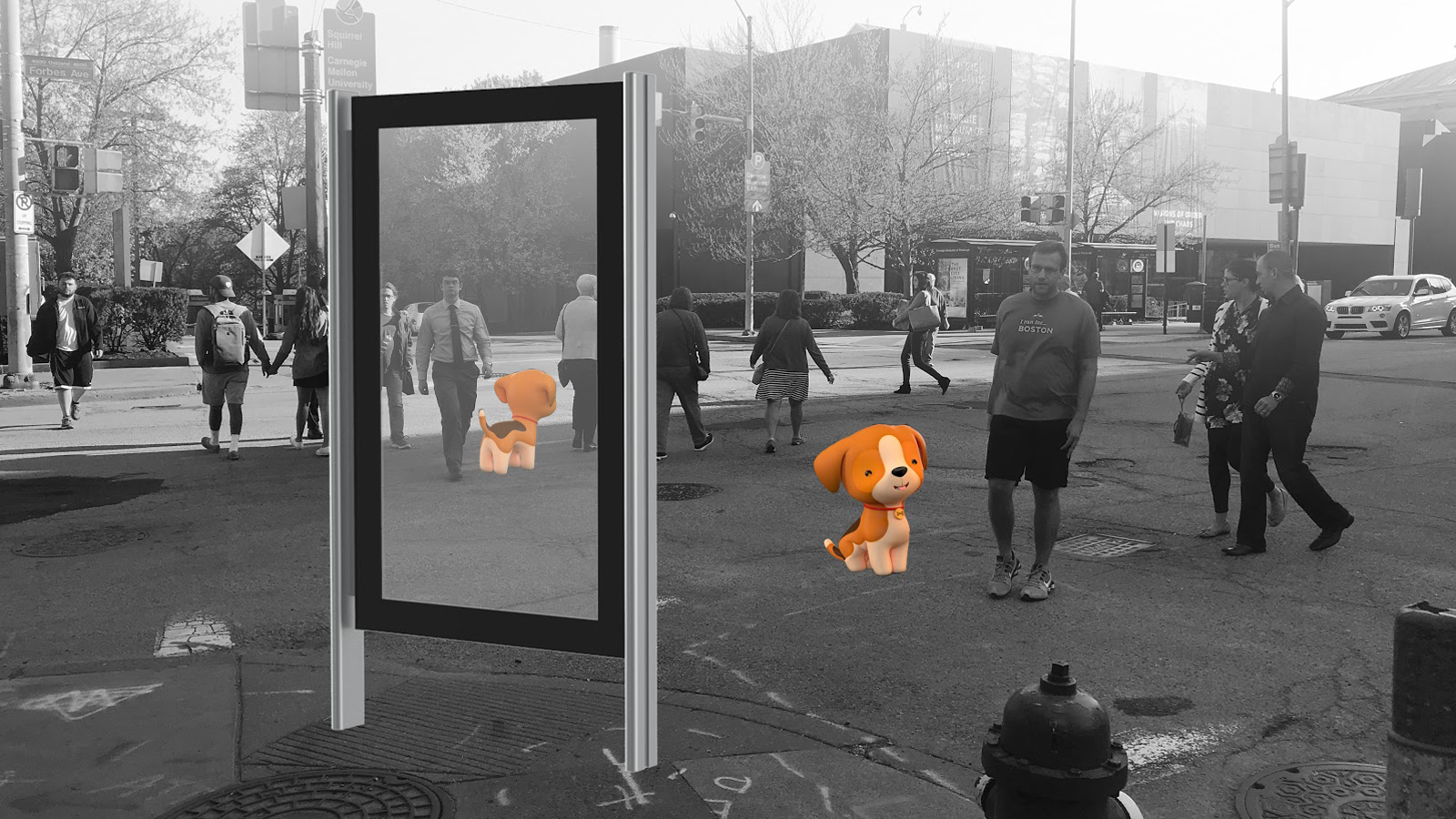 To recapitulate, our co-designers suggested that it would be really helpful if we leveraged human factors and had an actual human or a policeman at the intersection, and that it might be effective if wrong doers can be shamed. We abstracted that information and came up with this fierce, yet adorable little puppy - Deputy Dexter

Deputy Dexter like every other dog wags his tail when he’s happy, barks and growls when he’s upset. Since we believe people already have these mental models, we believe it will be easier for them to understand his purpose. 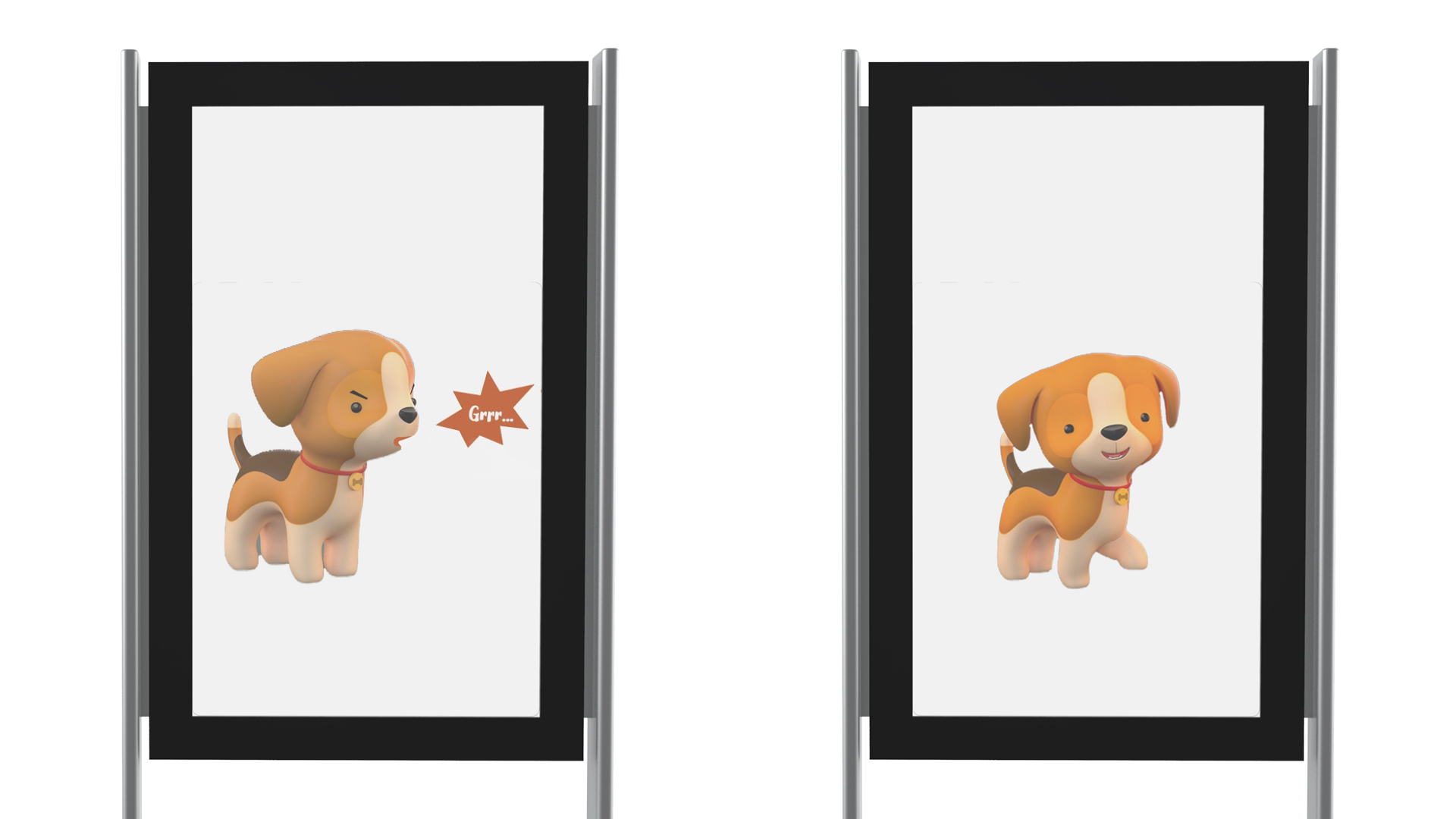 The most important criteria we wanted to fulfill during the implementation of this digital display were:

We initially envisioned the display to be part of a small kiosk on sidewalks, however there are regulations prohibiting placing objects that close to the road. We also wanted as many people to notice the display as possible. This is why we decided to install these displays on the walls of bus stops.

The bus stop we targeted at the Forbes and Craig intersection is just outside a museum. We could potentially partner with the museum (Our client from the museum mentioned that it would be something they'd be interested in) and the constant flow of visitors to the museum would help us achieve the reach we wanted. 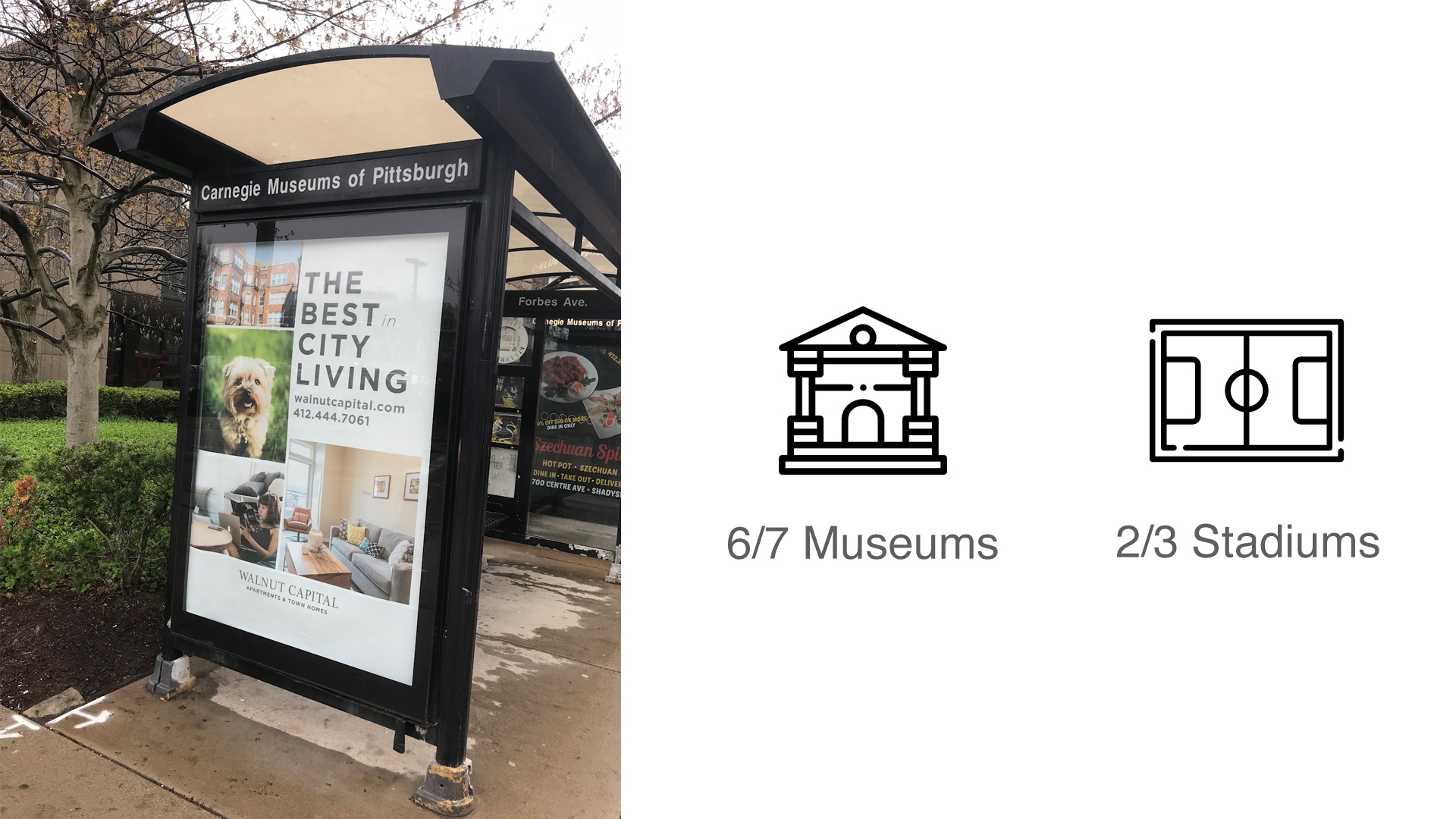 We searched for patterns in the urban plan of Pittsburgh and found that 6/7 museums in the city had nearby bus stops on busy intersections, and so validated our strategy. In the future we could also propose targeting stadiums because 2/3 stadiums in Pittsburgh had bus stops nearby.

We also brainstormed possible variations to Deputy Dexter. We could use a team mascot like the Pittsburgh Penguins at stadium intersections, and maybe a dinosaur at the intersection outside the Carnegie Museum of Natural History.

We went one step further and brainstormed implementing this solution in other countries as well. Perhaps we could use a koala in Australia, a peacock in India and maybe a chubby, little panda in China?

Will this solution work for potential sponsorship?

Although we researched that we can bring the costs down to as low as $100 per display, this still is not cheap. We brainstormed that we could potentially partner with companies working in the same space like Google, Waze, Port Authority, the Carnegie Museum groups and the Pittsburgh Penguins.

We can not say for sure what the answer to the question is. What we can say for sure however is that there is value in our product because of the data it is constantly collecting.

Our interactive displays with Deputy Dex, are very visual. We thought that we could leverage this and somehow tie the idea to social media. We came up with the hashtag #DeputyDexter.

If a pedestrian found themselves at an intersection in Pittsburgh they perceived to be unsafe,, they could should a tweet or an Instagram post with the hashtag #DeputyDexter and their location. This would help our team make note of the most dangerous intersections in Pittsburgh which would further inform our future roll out plans.

We designed an email that we could send out to people in Pittsburgh with a one page website explaining how they could use the interactive display and how it would help the city.